THE PLANETA TEAM VINTAGE; AT THE END OF AUGUST IT IS TIME FOR OUR FIRST ASSESSMENT

Menfi, 31st August 2020  The wine-producing company Planeta, with its history of 17 generations and among the most important in Sicily – about 400 hectares of vineyard and six wineries in five areas (Menfi, Vittoria, Noto, Etna and Capo Milazzo)  – is about to complete the first month of harvesting which began on 10th August at Noto.  Although differing from the rest of Italy, August is an important month for Sicilian wineries and in particular for Planeta who will complete 30% of their harvest during this month.  Thus we can begin to prepare a provisional summary of the year’s progress, awaiting the end of October with the harvest of grapes on Etna to complete the report.

‘The grapes arriving at the winery until now are absolutely at their best.  A dry summer without excessively hot spells has naturally resulted in a low yield, aromatic profiles and excellent density, with perfect healthy grapes.  Chardonnay, Grillo, Sauvignon Blanc, Moscato, Fiano and Syrah are already mostly ‘at home’, and are of exceptional quality, to the great satisfaction of the whole team’, says Alessio Planeta, directing the company.

Yes, the team.  This year the Planeta team’s task has been to describe the 2020 harvest, a year which has been defined by the alarms and uncertainties caused by the COVID-19 pandemic throughout the world.  The team will do this through social media and a direct Zoom, arranged for 19th October at 6pm – save for changes of timetable due to any unforeseen production reasons – and reserved for those who pre-book on planeta@planeta.it, when it will be possible to ask questions of those working in the wineries, chiefly the winemakers.

‘In recent months winemaking companies have been divided into two; those who have followed man-made rules that have regulated their activities, and those who have followed nature’s rhythms and haven’t paused for one moment’, states Alessio Planeta.  ‘Our team in vineyard and winery has been truly extraordinary, I can say that it has maintained the whole company.  Due to them we will describe the 2020 harvest through their eyes and their thoughts.  It will be the vintage of Planeta’s men and women’.

Planeta embraces five territories in Sicily (Menfi, Vittoria, Noto, Etna and Capo Milazzo).  In each of these places are different and unique people, vineyards and wineries that relate their distinctive features.  Such as Vito Gambino, originally from Roccamena, with twenty years of experience, who will talk about the harvest at Menfi, and Alessandro Serughetti from Cinisi, recently returned from Margaret River in Australia and present at his third Planeta vintage, who will uncover the secrets of Cerasuolo di Vittoria.  From Noto Calogero Riportella, a native of Sciacca and son of an expert; his father Filippo is the agricultural specialist for vines and olives, irreplaceable support and right hand of our founder Diego Planeta.  On Etna we have an outlook which has to be different, that of Patricia Tóth, Hungarian, though now Sicilian by adoption after 15 years.  And finally on Capo Milazzo, Alessio Planeta will follow and describe the harvest himself.  ‘Going back to the beginning, staying in a winery like a beginner wine-maker, will be my personal way of remembering the 2020 vintage that we are certain won’t be remembered like any other’, he comments.

The great news of this year is the two new vineyards planted in recent years which are producing their first fruits.  The first, 28 hectares of vineyard in the Menfi area, is in the Cirami district, near the Ulmo and Maroccoli wineries.  Nearby, in the Risina district, is a Greek (or perhaps Phoenician) winepress, dug out of the living rock and dating from about 2,500 years ago, while facing Lago Arancio and at a height of 450 metres, provides a breathtaking view to the sea.  The second new vineyard is on Etna; 10 hectares in a single block in the Feudo di Mezzo area, from which the winery takes its name, a district at the centre of the magnificent wine growing area of northern Etna and comprising one of the largest vineyards in the area, entirely cultivated with Nerello Mascalese and Nerello Cappuccio.

Together, 38 hectares of splendid wine-growing country, and another important step towards the best quality.

‘At the end of the September we will provide a further general update, while you can follow the harvest day by day, guided by our team, on our social profiles.’  Alessio Planeta. 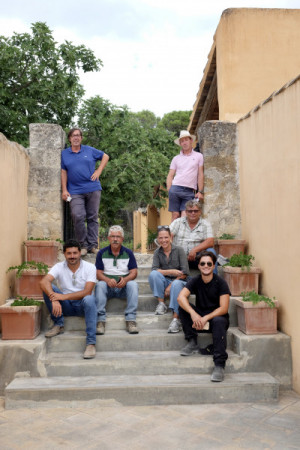